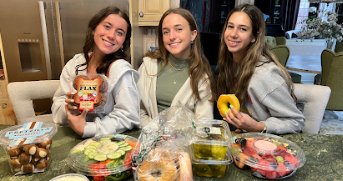 After sampling some of Randazzo’s top pick food items, the results were to my liking– for the most part.

Randazoo is known for their fresh produce and freshly baked goods. They make many products in store, including the fresh daily bagels.

When sampling these bagels my friends and I tried the egg, triple berry, and cinnamon raisin bagels. To start off, the egg bagel, which tasted like a plain bagel, had a bright yellow color. The triple berry bagel was a good combination between the sweet berries and the saltiness of the bagel. The cinnamon raisin bagel was a tasty combination as well with gooey raisins and swirled cinnamon. The dough within the bagel itself was super fresh and had a soft, mouth watering texture; it was a perfect consistency between being too soft and not soft enough. The bagel melted in my mouth and didn’t leave me feeling parched. The price was also a great deal of 5 bagels for 4 dollars.

Next we moved onto my personal favorite, the vegetable tray paired with randazzo’s homemade dill dip.The dip was placed in the center of the veggies. The presentation of the tray was at a satisfactory ranking as well. The vegetables that were included in the tray were red & green peppers, broccoli, cauliflower, carrots, cucumbers, and tomatoes. The smell of certain vegetables was not the best, however this is expected. The veggies were super fresh and none of them were too mushy or too ripe. The dill dip which consists of sour cream, mayonnaise,and dried dill weed, was what really made this tray outstanding. The combination of the dip and veggies left me feeling satisfied.

Thirdly, I ate flax seed cranberry and orange muffins. I have had regular muffins of this flavor and they were to my liking, but these flax muffins were much different. They were very grainy and quite honestly the worst item out of all the food that I tried. The flavor was very bland and the cranberry and orange flavor was barely even there. For the texture of the muffin, it wasn’t tragic but it was on the more dry side. Personally, I will not be purchasing this item again.

After the muffins, we moved onto the fruit tray. To give Randazzo’s the benefit of the doubt, the fruits that were in the fruit tray were not in season. The fruits that were in the tray were melon, cantaloupe, watermelon, and pineapple along with some strawberries placed around the fruits.The fruits were presented very nicely in the tray and were paired with a pink fluff dip in the center of the tray. The dip was a bit on the sweet side, almost too sweet when paired with the already sweet fruit. The fruits themself although presented nicely, were not the best, texture wise. The watermelon was too ripe, leaving it crunchy. Both the melons were nearing the end of their explanation date leaving them on the mushy side.

Lastly, we devoured the large pickles. In a container of two these pickles were placed in vinegar, water and salt. The pickles were crunchy and delicious. The pickles however were very large so they had to be cut up in order to fit into one’s mouth. The taste was the perfect amount of bitter and salty, they weren’t too overpowering but definitely left an aftertaste. They were an item that you have to be in the mood for. Personally, I’m always in the mood for these pickles so I will most definitely be purchasing these again.

To conclude, all these different foods had their good things and bad things about them. There are certain items which I will be purchasing once again and items that I hope to never encounter again. Overall, Randazzos is a great produce place when needing groceries.