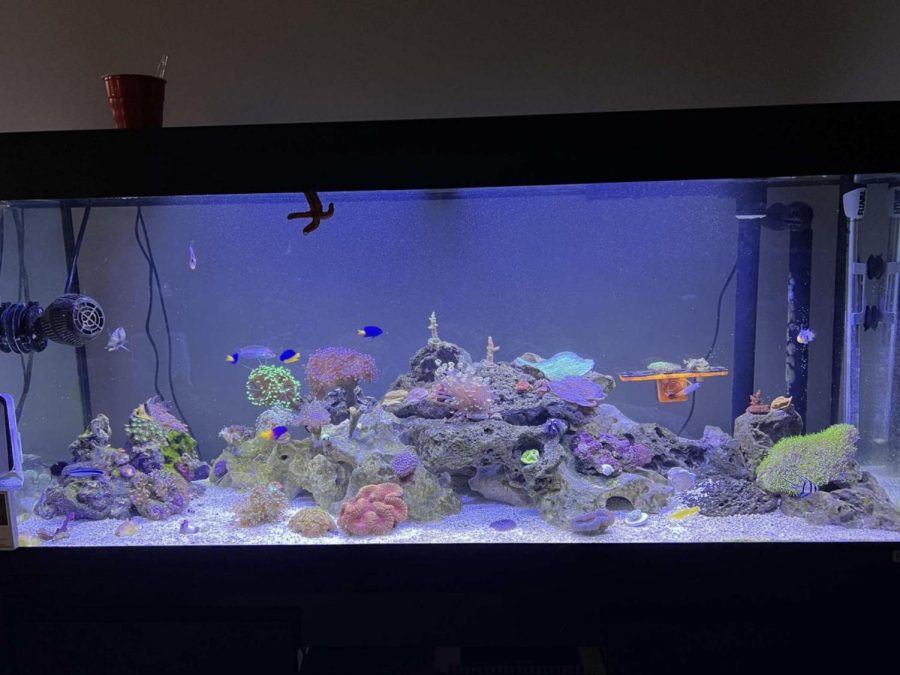 or a year, seniors Jacob Landrum and Jacob Sandvig invest in an aquarium together. “It’s less of a hobby and more of an addiction,” Sandvig said. The saltwater aquarium contains orange clownfish, colorful firefish and tangs, swimming around, filters and corals.

The fish in Jacob Landrum and Jacob Sandvig’s aquarium know what its like to live on the other side of the pond in their luxurious and elaborate fish tank.
“It’s fun to create an ecosystem and watch it evolve and grow on its own,” Sandvig said.
Landrum and Sandvig started the fish tank together in April of 2021, after working at Kee’s Pets. This collaborative tank, held at Landrum’s house, contains a variety fish and decorative pieces.
“I am just amazed at all the work he’s done and have a greater appreciation for that effort,” father Chris Landrum said.
The saltwater tank includes orange clownfish, colorful firefish, tangs and more, among rockscapes, coral and filters.
“If I let it go on its own devices, it’ll slowly just start going downhill,” Sandvig said. “I have to put the work in to keep it working.”
The tank is outfitted with a filtration system located underneath and paired with a protein skimmer to attract proteins and other amino acids.
“Eventually, I’ll get to the point where I have so much corals in there, I can start selling them for profit,” Landrum said.
Landrum and Sandvig want to continue their work not only for some extra income, but for fun, too.
“It’s satisfying to keep things alive in there and just watch them grow up,” Landrum said. “It’s motivating to have a safe environment for them.”