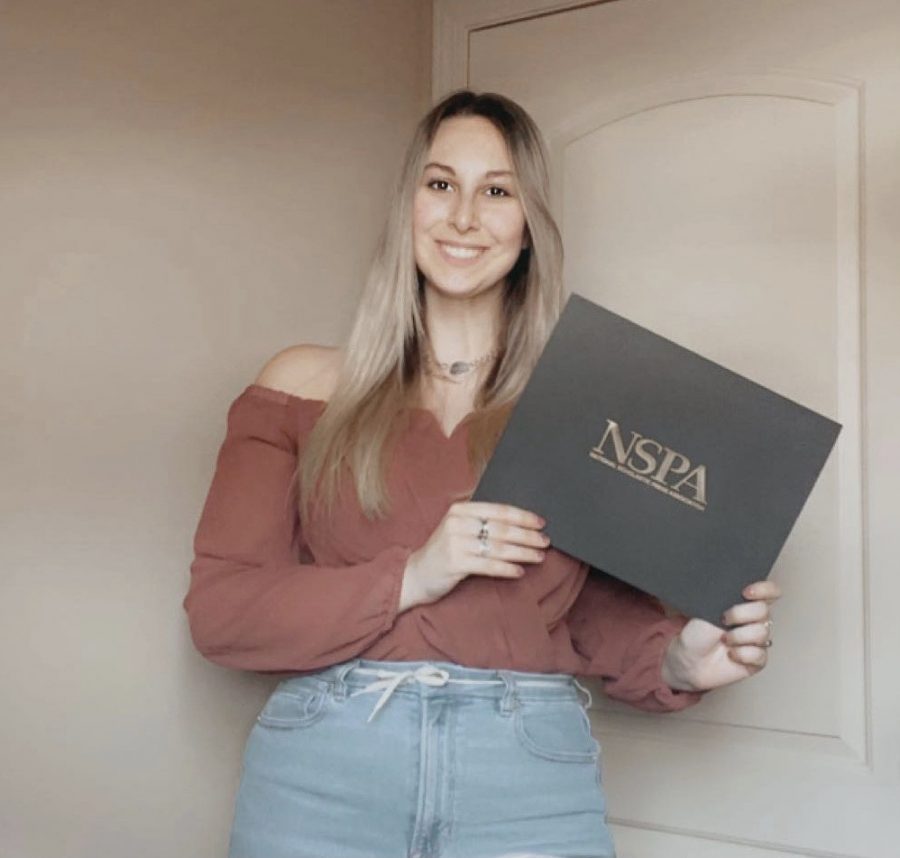 After placing third for journalistic photography at NSPA, senior Justice Seay displays her award. “I’m most proud of the fact that I was recognized for a piece I really enjoyed doing,” she said. “I’m very happy that I not only got to create a work I was passionate about, but [that] it was meaningful enough to stand out to someone.” This was Seay’s second award at a national level.

“When she [publications adviser Erica Kincannon] first announced it, I was pretty excited to find out that I won an award and I just assumed that it was comparable to a MIPA (Michigan Interscholastic Press Association) award I won last year, which was a big achievement for me,” Seay said. “But after she explained how significant the national win was for Eisenhower news media, I was simultaneously shocked and elated.”

In addition to the NSPA, Seay was named a national Quill and Scroll winner for the same project and won first place at MIPA last spring. The Eisenhower news media staff won an award from the NSPA years back, but Seay is the first in a while, Kincannon.

“When I opened the envelope from NSPA, I was so proud to see one of our student journalists earned national recognition for their work,” Kincannon said. “Justice joined staff last year and quickly became our resident photography, design and writing guru and earned herself a promotion to Managing Editor this year. I’m not surprised she was honored for her work because it truly stands out as top notch; but I am thankful others in the nation recognized her.”

The win came as a surprise to Seay as she didn’t know senior Editor-in-Chief Kendall Westgate submitted her for the award.

“I’m very grateful I was submitted; it’s a huge honor that I was even considered for the award,” Seay said. “I would have never guessed I would place considering how large scale the competition is and how many people I was likely up against.”

Seay started photography as a small hobby in the sixth grade; however, it wasn’t until taking photo and film with Kristine Cooper and yearbook with Laure Mervich in eighth grade that this hobby became a passion, according to Seay. More recently she took journalism with Kincannon and AP photo with teachers Nancy Druia and Jennifer Ramirez.

“It felt amazing to be nationally recognized for something that started as just a small hobby six years ago,” Seay said.

She plans to major in journalism at Michigan State University in fall 2021.

“I think many people, including myself, who choose their passion as a career have a pit of self-doubt as to whether they can actually succeed in it long-term,” Seay said. “Winning this award gave me some sense of validation that the path I’m taking is the one I’m meant to be on. It feels great to know, even this early on in my journalist career, my work has the ability to make an impact.”