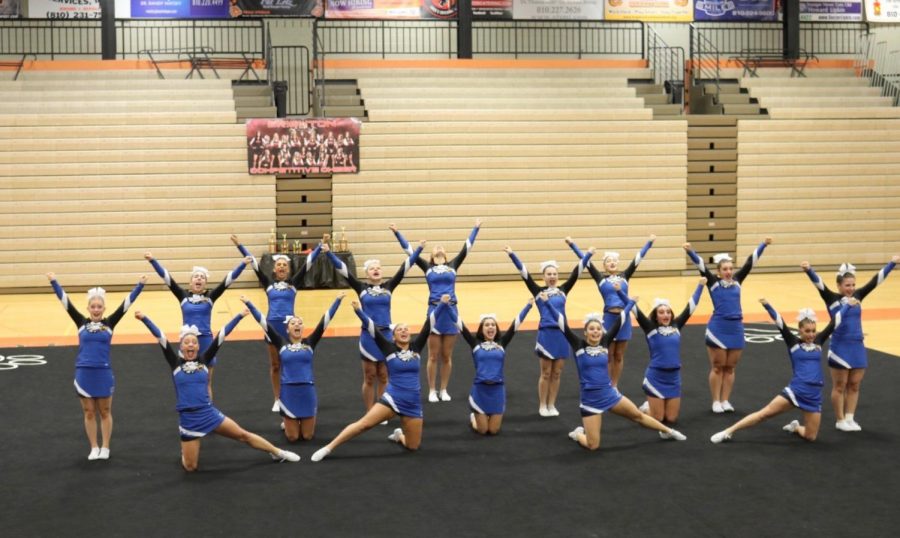 Hitting the final pose of round one, varsity cheerleaders aim to impress the judges with their facial expressions and projected voices. “We really try to be loud and super sharp to initially grab their attention. We also use big facials to keep them entertained throughout the routine. This benefits our overall presentation and ‘wow’ factor, which ultimately ups our score in the end,” junior base Jaden Potance said. Making their routine engaging to judges helped the team score first places at their competitions throughout the year.

Varsity cheerleaders go for gold, with winning States being the most prominent goal in their minds as they strive towards success one competition at a time.

“We’re very pumped and excited. We’ve been working so hard all season, so we’re finally ready to show off, prove ourselves and show that all the hard work has been worth it,” junior base Marialisa Sugameli said. “Our team’s main focus this year is focusing on our endgame and putting that mindset into everything we do, so that it makes us work 10 times harder.”

States is a competition held between the top eight Michigan teams, which is determined through 12 competitions throughout the season. The highest placing teams of the season come together to fight for the first place spot, which allows them to be recognized statewide and possibly elevating their program’s reputation. In order to achieve this, the varsity team must be successful at their competitions over the season.

“[The standards] are motivating because we know we can amount to what we were last year and even more, but it’s also a lot of pressure because if we don’t exceed that level then it doesn’t look very good for us,” Sugameli said. “I’m working on my positive energy and helping my team to push through the season and amount to bigger and better things.”

After placing seventh at States last season, the team is focused on doing the best they can. Competitions are vital to prepare the team for the physically and mentally demanding work ethic they’ll need at States, according to Sugameli. The pressure, crowds and competitive spirit at competitions over the season are meant to imitate that of States. In practice, drills and conditioning exercises are implemented to help build stamina and keep the athletes in top shape.

“[The competitions] really help us focus on the pressure and trying to contain our nerves,” junior base Jaden Potance said.

Following the high scores of last year’s team at States, this year’s varsity team is using hard work and positive attitudes as their way to improve upon the former team’s seventh place. They focus on doing their best, not just winning, according to Potance.

“We’ve been really focusing on the little things, but also running through all the rounds a lot of times so that we feel confident,” Potance said. “We are really confident going into States this year knowing we have the potential to do very well.”