With thoughts and care about the stage

Over the course of several months, students worked to create the set for the play In September, the theater department held the “The Phantom of the Opera” and throughout the months, the stage changed into an opera house with visuals to go with it 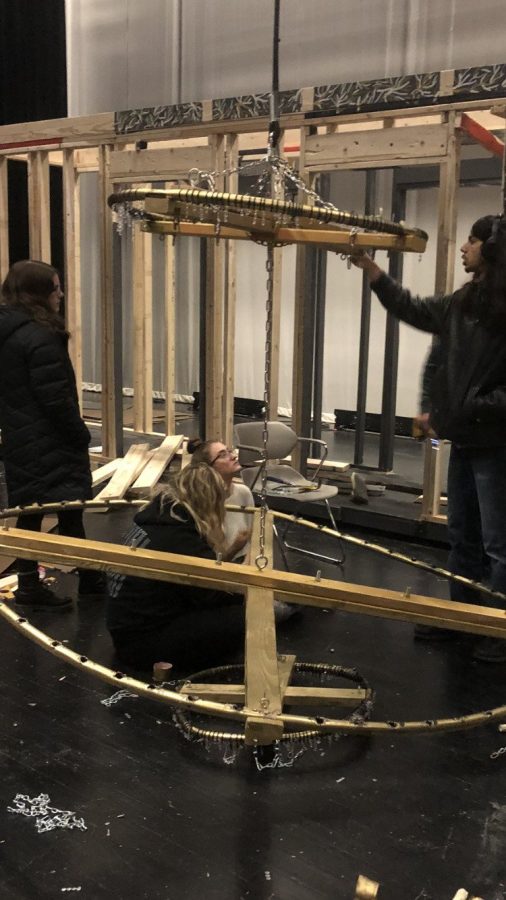 Engulfed in their work, seniors Isabel Hafner, Satbir Mangat, Anna Schimdt and Samantha Ludwig create the chandelier for the show. “I think that it is why I ended up getting into stagecraft and the theater aspect of the school in general. And I taught myself a bunch of other aspects I use to build.” Mangat said. They spent their time since September producing the stage for the show.

In September, the theater department held the “The Phantom of the Opera” and throughout the months, the stage changed into an opera house with visuals to go with it.

“Honestly, it’s awesome,” theatre director Eric Wells said. “It gives me a chance to really work with these kids, showcase their talent, teach them some new skills and to push them a little bit to go above and beyond what they think they can do and make them exceed their expectations.”

“The Phantom of the Opera” took place on Nov. 7, 8 and 9; this included a matinee along with the three evening performances. The event required a large number of help and both woodshop and the tech crew worked several hours each day to create the finished product.

“Mr. Wells approached me last year about it and asked me if we would like to be involved with their construction class. I said yes; I get to see kids do things they didn’t think they could do,” woodshop teacher Ryan deCardenas said. “I get to see kids think outside the box and come up with different ideas.”

In addition, the students who participated in crafting the set, built a bond and learned how to hold responsibilities since the craft is an important asset to the shows.

“I became more open with other people. I wasn’t really scared to show who I was; it gave me more leadership qualities. As the years went on, I became more of a ‘Hey, what do I do?’ kind of person to ‘Hey, tell me what to do to. Help me do this or how about this,” senior technical director Satbir Mangat said.

The school’s next performance held to happen is “West Side Story” and try-outs on Dec. 2-4 after school in the performing arts center and choir room.